Back to the top

“The owners of the pub crowned as having the best pint of Guinness in Donegal say they are delighted with their win as they knew how strong the competition was in the online Donegal Democrat readers’ poll.

Biddy’s O’Barnes, in Barnes Gap, were declared the winners after polling over 5,000 votes in our online poll.

The pub is now run by Aaron Slevin and his wife Megan.

Megan said the competition caused quite a stir in the bar and they were delighted with the result.

“Myself and Aaron are pretty good connoisseurs of the pubs in Donegal so we knew we had some good competition. I think Donegal has the best pub culture in Ireland,” she stated.
The popular pub has been in the Slevin family for a number of generations and Aaron is the son of John Slevin, the former landlord, and Megan originally hails from Texas in the United States.

“We were delighted and excited by the news we won. We knew we had a ton of good competition. We chalked the win up to the locals who keep the Guinness free flowing and fresh in the bar.

“Our staff were also super keen on the competition and sent the link out to all their friends and families. We owe it to our staff who are amazing,” Megan added.
All the bars in the poll received a large amount of votes with the runners up being Sharkey’s Bar, Annagry and Whoriskey’s Bar in Cashelard, Ballyshannon.” 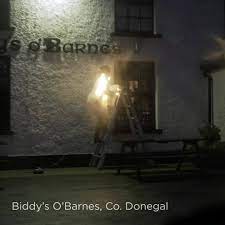 Can you find us in #GuinnessIreland’s newest AD campaign? 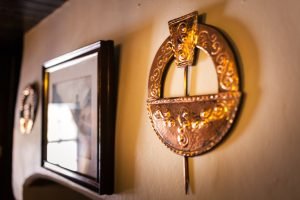 Biddy’s O’Barnes is a famous roadside Pub in Barnesmore Gap, Co. Donegal, Ireland. Since it’s days as an Inn, dating back to the 18th century, a time when the Coach was the main form of transport, Biddy’s was a stopping point, where horses were rested, and travellers relaxed before the next stage of their long and tiring journey through the Gap. Today we continue that tradition.